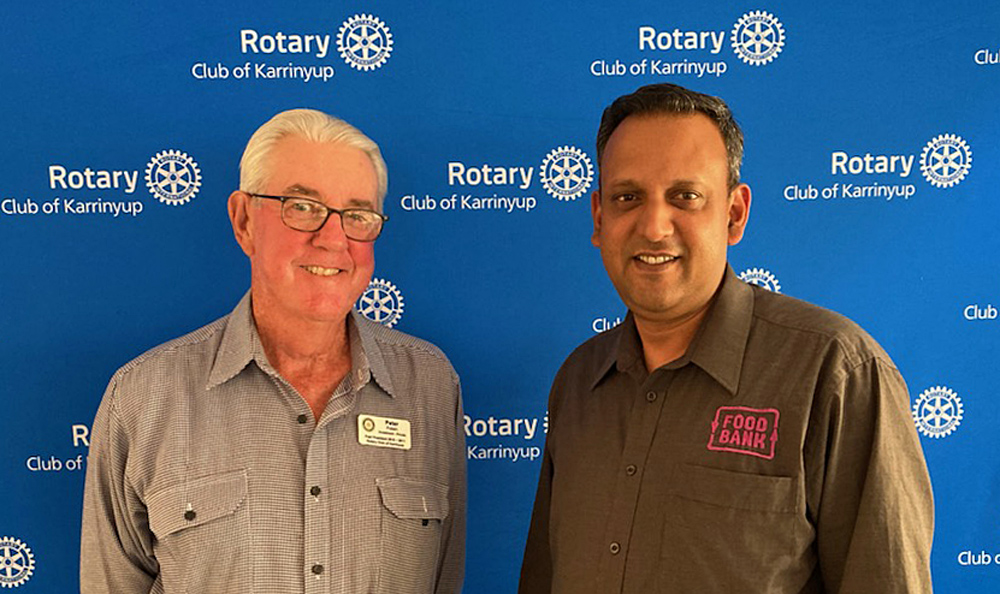 The Rotary Club of Karrinyup has had a long association with Foodbank WA,having been involved since its inception in the early 1990’s. Our Charter President Graham Fosbery, served as a Director, during those early years. He was also instrumental in introducing our late Past President Barry Tibbits to the Foodbank Financial committee, where he was able to provide professional financial services and guidance during a difficult period of rapid growth at Foodbank.

This week, Ian de Nazareth, seen here with former Community Service Director Peter, visited our club to bring us up to date with recent developments. The statistics about people needing food support are just  staggering and the logistics of feeding those in in need throughout the state are almost overwhelming. However, it is the simple examples that illustrate the problem. Ian described how he was moved and motivated by the story of a young girl asking her mother for food and her mother having to explain that there simply was no food in the house.

Single mothers are among the hardest hit as they need to work and raise their children without support. However, “food insecurity” also has an impact across the wider community, as increased interest rates and higher fuel costs are resulting in more families not having sufficient food.

The challenges include large distances, people having to overcome pride and shame and beliefs that others may be more in need of the assistance. Foodbank aims to provide a dignified experience for those in need in a country that can feed its population five times over.

Further information can be found at www.foodbank.org.au. Karrinyup Rotary has just recently made our substantial annual donation.