Help for Homeless in Perth

For several weeks Karrinyup Rotary's Homeless Support Group has been collecting items and preparing backpacks for the homeless. Team members Sandra and Jane dropped the backpacks off at the Perth City Homeless Support Group's warehouse. Volunteer Coordinator Jed was very surprised at the quantity and the quality of the goods and most appreciative of the support.

Perth City Homeless Support Group is the largest of Perth's homeless groups and they have definitely got the groups very well organised. All groups or organisations delivering goods and food to the Perth homeless must be registered with the city. This is to stop people haphazardly leaving food, clothes and other items around the city in an unorganised manner. Previously some of these items dropped were not being picked up and therefore were wasted.

Tuesday evenings in Perth is when the groups go out to reach the city's homeless to give aid where needed. Our back packs were to be given out on Tuesday 19th July when they went out.

As the largest group, Perth City Homeless Support Group have secured a spot near the McIvor train station on a Sunday between 8.30 and 10.30. At this time they have up to twelve gazebos, where they hand out food- hot and cold- clothes, hygiene products and much more.

On Friday's there is a working group at the warehouse to prepare the food that is handed out on a Sunday. Sunday was chosen as they felt that this was indeed a time when help was required, as other food and shelter places in Perth operate Monday to Friday so by Sunday the homeless are in dire need of food and support. 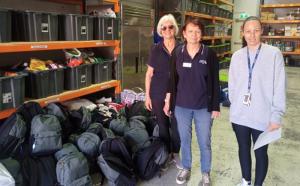