Rotary’s focus this month is on disease prevention and treatment! This sounds a pretty tall order for a group of volunteers such as Rotarians with about 1.2m members worldwide. It is, but there is an amazing story connected to this bold aim.

With disease prevention we naturally think of Polio Plus, but there are many other impressive projects being carried out, too numerous to mention, but I will draw your attention to one.

It is the war against malaria, RAM, or Rotary against Malaria. It is an Australian initiative.

RAM was started in the 1990s and has had much success, particularly of late, mainly in the areas north of us such as Timor-Leste, with less success in Papua New Guinea and the Solomon Islands.

For those with a scientific interest, malaria is caused by a parasite, Plasmodium, and spread by female Anopheles mosquitos.

Globally, apart from Timor-Leste, malaria cases are increasing.  In 2017 there were 219 million new cases with 435 thousand deaths. Prevention and early treatment are vital in saving lives. Timor-Leste is on target to be malaria free by 2020/21. It will then receive a WHO malaria elimination certificate.

Why is Timor-Leste achieving these results? Notably because of a small lady, Jenny Kerrison, who often starts her address to Rotary clubs with an African proverb:

“If you think you are too small to make a difference, spend a night with a mosquito”

She has organised a $US251K Rotary global grant and has been supported by donations from 15 of the 21 Australian Rotary Districts. The program consists of supplying mosquito nets and residual spraying. The recent funds, $215K, enabled 40,000 nets being supplied, mainly for pregnant women who are at high risk. It also meant 80 Hudson sprayers were bought for inside spraying of the insecticide. 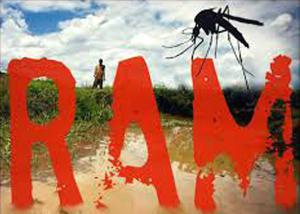