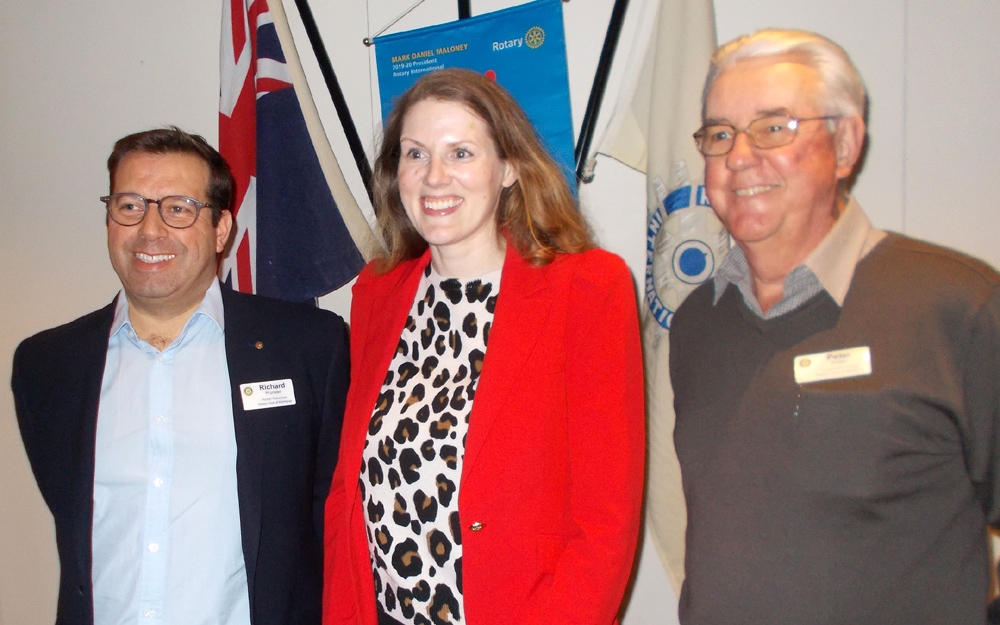 At a recent meeting, Community Service Committee member, Peter, seen here with President Richard, introduced Dr Stephanie Rainey-Smith from the Australian Alzheimer's Research Foundation to discuss the disease and tell us how one can reduce risk and delay onset. Stephanie has a PhD in Neuroscience from King’s College London and works in the area of neurodegenerative diseases. She is also a member of the Rotary Club of Freshwater Bay.

Dementia, is now the second highest cause of death in the nation. Alzheimer's Disease accounts for sixty to eighty percent of cases. It is not part of the normal ageing process but occurs through the toxic accumulation of amyloid protein in the brain or other health problems caused through the loss of memory or loss of an essential function.

In Australia there are 250 persons diagnosed with dementia every day and there are 425,000 persons living with dementia – i.e. about 1.7% of the population. This frightening number is growing  and it is estimated that one million Australians will have Alzheimer’s by 2050 without a significant medical breakthrough.

Not only is dementia a terrible disease, it has a significant economic impact.  It has been estimated that delaying onset of the disease by five years will not only halve the number of cases, it will save $67 Billion.

While there is no cure and no accurate prediction of dementia, there are a number of factors that result in a statistical lower incidence. The role of diet as an environmental factor associated with Alzheimer’s disease is becoming well known. A healthy diet with plenty of fruit, vegetables, fish and cereal is recommended. Other factors include physical activity, social engagement and adequate sleep, improving sleep quality and mental stimulation and socialisation. Further information is available from https://alzheimers.com.au/

On behalf of the Australian Alzheimer's Research Foundation Stephanie expressed her appreciation for the Club's ongoing support.